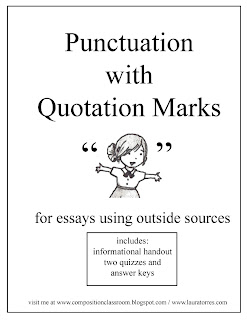 I developed these handouts and quizzes for my students who should know basic quotation mark rules (but often still make errors), but are new to adding in-text citations to their papers. As you know, with a direct quote, the punctuation would normally go inside quotation marks, but if an in-text citation is added, the punctuation goes on the outside of the parentheses at the end of the sentence, both in MLA and APA format.

This, of course, goes against the rules they've been taught, so they will likely make mistakes unless it's explicitly taught. There are also quote-within-a-quote issues and several other situations that are new to most students who are beginners at including research in their papers. Click here or on the picture to get this free download. I like to review with the handout, then give the first quiz as a practice quiz to check for understanding. I hope you find this useful in your classroom. 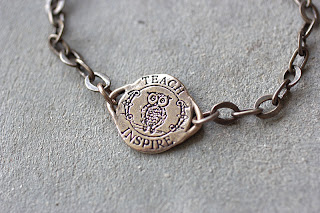 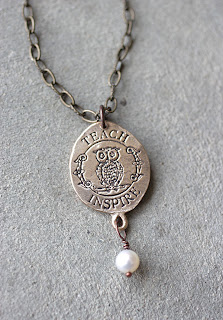 My sister, Sherri Haab, is a well-known jewelry maker and teacher (see her website here). I asked her to make me some jewelry that reflected what I do for a living. Call it a little wearable inspiration for the beginning of a new school year. I loooove what she came up, so I asked her to make a bunch more, because I knew other teachers would be interested. The illustration is hand-etched in brass and she puts each piece together by hand. They're really special pieces. So, click on the pictures if you want to wear a little of your own inspiration, or have a teacher friend that could use a little boost.

Email ThisBlogThis!Share to TwitterShare to FacebookShare to Pinterest
Labels: back to school, jewelry, teacher gifts, teachers

Recognizing the difference between active and passive voice doesn't come easy for some of my students, so I broke it down in a simple, visual way that has helped tremendously. The terminology of parts of speech can throw them off, too, so I use the words that make sense rather than the technical terms (although I teach those, too, for accuracy's sake.) To illustrate active voice, I draw this guy on the board: 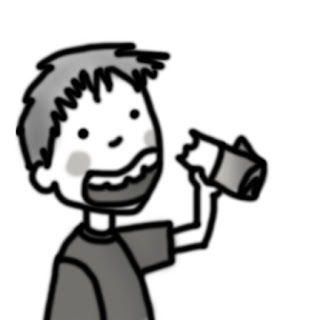 Andrew is eating the burrito.

I explain that we have the agent (or do-er) of the action first (Andrew), and the thing that is being acted upon second (the burrito).

For one passive voice construction, I draw the same image, only flipped, on the board: 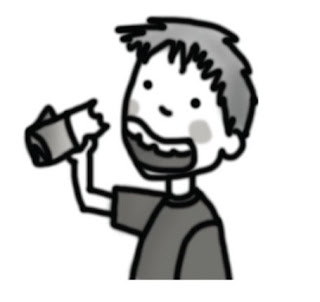 The burrito is being eaten by Andrew.

Now, the thing that is being acted upon (the burrito) comes first and the do-er is second. For the second passive construction, I just draw the burrito: 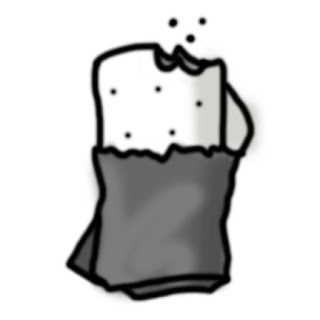 The burrito was eaten.

Here's the lesson plan I put together on this, which includes the above, plus some worksheets and a quiz. Now, I'm going to eat a burrito! 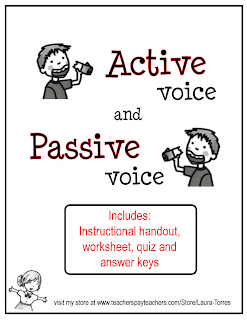 Posted by Laura Torres at 6:00 AM 2 comments

Getting Organized - Teachers on the Move 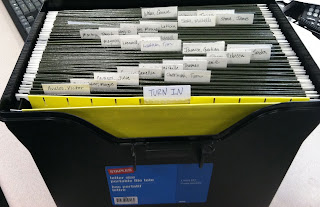 I don't have a classroom. I'm one of those teachers who is in a different classroom depending on which class I'm teaching and which day of the week it is. It's taken me almost two years to figure out a system for all the paperwork that is efficient and easy to manage.

My biggest fear (because it had happened) was losing papers, and my biggest inefficiency was wasting time handing out new papers and returning old ones. Toting around stuff for five classes and around 125 students was one big organizational nightmare, and my briefcase (aka "suitcase") was always in disarray despite my best efforts with file folders, labels, etc.

Here's the system I have landed on, and it works for me, so maybe it will for you, too. For each class, I have a file box with a colorful folder labeled "Turn In" at the front, and then regular green file folders with each student's name on it behind that.

Students are not allowed to hand me a paper when it's time to turn in work. They have to turn in all work to the "Turn In" folder. That way, I can't be responsible for misplacing it, everything stays in one place, and there's no chance of mixing it up with another class.

Then, when it's time for grading, I pull out the "Turn In" folder, record the grades, and place the papers to be returned immediately in each student's personal folder. I also put all handouts for the next class period (except quizzes) in their folders so I spend no time in class distributing papers.

At the beginning of each class period, students sign in, turn in work to the "Turn In" folder and retrieve their graded papers and the day's handouts. This system is organized, efficient, and I haven't lost a paper yet since I switched to this system. Knock on wood!